Rabbits produce two types of poo.  The first type are called caecotrophs and they are soft, sticky dark coloured poops (covered in mucus and sometimes with a greenish tinge). Rabbits actually eat their caecotrophs but this usually happens at night so often owners never witness this. They eat the caecotrophs straight from their anus. This type of poo is rich in nutrients and rabbits must consume them in order to remain healthy. Too many caecotrophs (often caused by a starchy/carbohydrate based diet instead of a high fibre diet) can mean the rabbit does not eat them all and they can get stuck in the fur around the anus.

The second type of rabbit poo is the type you see in their litter tray, around the garden and in fields where wild rabbits live. In comparison to caecotrophs these harder droppings are larger, rounder and much drier. They have a fibrous quality and you should see fibre particles in them. Rabbits can produce over 300 of these droppings per day!

The size, shape and amount of poo your rabbits produce can be a very useful guide into understanding how healthy they are. Problems to watch out for include:

Plentiful, large, evenly shaped, round poops are what you should be aiming for. Any deviation from this should be considered as serious and a veterinary check-up sought as soon as possible. A reduction in number, size or a change in dropping shape could mean your rabbit is not eating or the digestive system has slowed down or stopped for some reason. This can indicate illness, stress, dehydration or blockages. Some medications can also affect the digestive system this way.

Fur in the poo causing the string of pearl effect usually occurs when the rabbit (or his/her friend) is moulting. Daily brushing to remove loose fur can reduce how much fur is ingested. Carpet or fabric fibres may also be seen in the dropping so it is important to keep chewable things out of reach and regularly check household items for evidence of chewing.

In this photo the first set of poops at the top are from a young, healthy female that eats a lot of hay.
The middle poops are from an elderly male rabbit that is on a lot of medication. Veterinary advice was sought on this. These poops are NOT normal and this should be investigated by a vet ASAP.
The bottom poops are also from an elderly male rabbit who has no known health issues but has been on a poor diet up until the last few months. His digestive system is gradually getting better and the hope is that he will also produce larger poops soon! 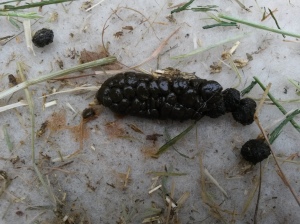